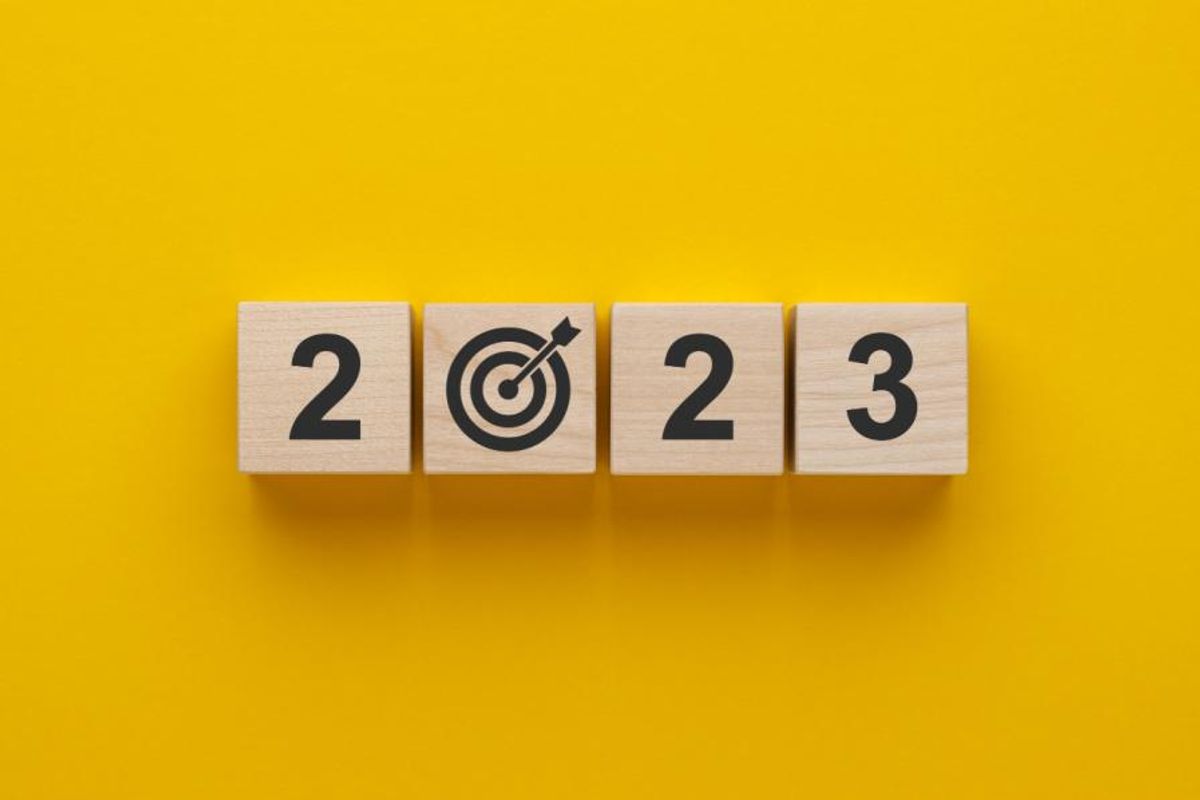 Fertilizer prices surged to new heights in 2022, continuing the trend that began in 2021. The toll of war, rising gas costs, Chinese export issues and high crop prices led to both phosphate and potash spiking to record highs in April.

“Agricultural prices reached record highs in Q2 2022 as grain prices shot up in the aftermath of the war in Ukraine — both Russia and Ukraine are key global grain producers,” the FocusEconomics 2023 commodities outlook reads.

“However, prices have fallen sharply since then, on the back of softer demand and July’s agreement that lifted Russia’s blockade on Ukrainian agricultural exports.”

During the second half of 2022, demand destruction resulted in a 10 percent to 40 percent decline in consumption for both phosphate and potash, which pushed values lower.

An increase in production out of Canada also eased some of the supply tension stemming from the war and Chinese shipment curtailments, which was reflected in lower prices.

The panelists at FocusEconomics anticipate agriculture prices to “(trend downwards) in the quarters ahead amid softer demand, but remain above pre-pandemic levels.”

The report continued, “A tight supply panorama will support prices: Ukrainian grain output will be dampened by the war even if the export deal with Russia remains in place, while high fertilizer prices this year could dampen crop yields in 2023.”

Although demand is forecasted to contract, the quality of soil has not improved, which will likely hinder crop yields as fertilizers are critical for healthy and abundant growth. Smaller crop yields are likely to add to the mounting cost of food, driven higher in recent months by inflation.

After rallying to an all-time high of more than US$1,000 per metric ton (MT) in April, the latter half of 2022 saw phosphate prices come down significantly.

The crop additive started the year at US$713 MT, with values continuously moving higher through April, when concern around Russian and Ukrainian grain and fertilizer exports reached fever pitch.

“Chinese fertilizer exports fell sharply in 2022 on government-imposed barriers. These barriers are set to remain in 2023, but as global and domestic prices move lower, we anticipate some relaxation,” a CRU 2023 outlook report notes.

Annually, China is the top producer of phosphate, with an output of 85 million MT in 2021, while Russia ranks fourth, producing 14 million MT the same year.

By the end of June, prices had slipped back to the US$789 level. 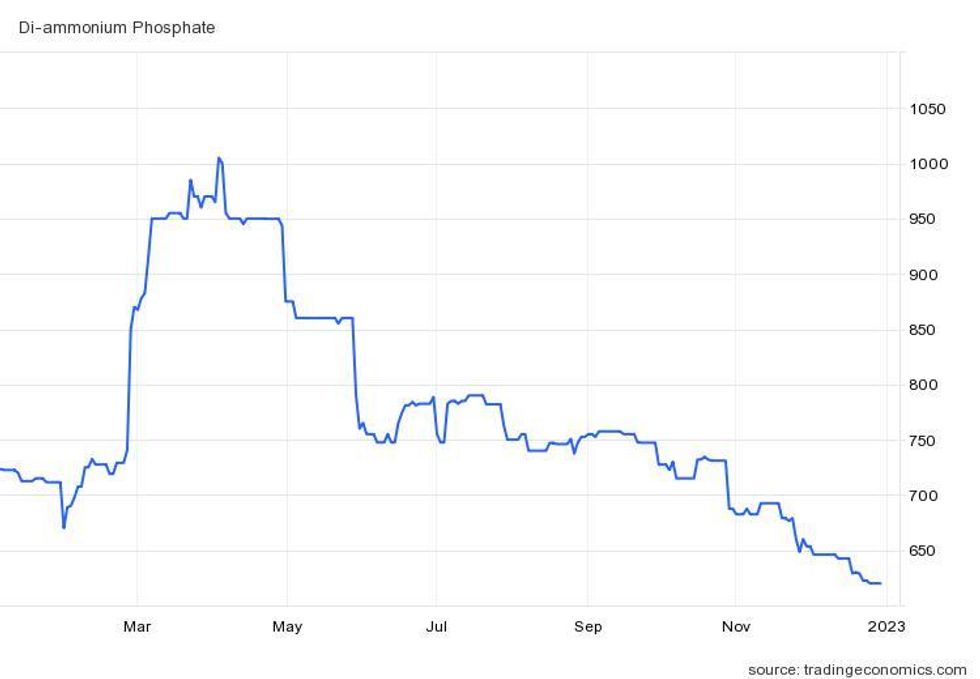 ​The cost of high fertilizer prices

Despite phosphate prices ending the year below January’s start value, the true cost of the record setting rise is yet to be felt.

The International Fertilizer Association estimates that 85 percent of the world’s soils are deficient in nitrogen, 73 percent deficient in phosphorus (phosphates) and 55 percent in potassium (potash).

This deficiency makes fertilizers essential to crop growth. Countering the broad-based increase in overhead costs, many farmers opted to limit the amount of fertilizer they purchased and used. This is expected to impact soil health and crop yields.

“The fertilizer supply/price crisis is in many respects more concerning than direct food inflation because it could inhibit food production in the rest of the world that could eventually help take up the slack from stalled Russian and Ukrainian grain deliveries,” Maximo Torero, chief economist for the UN Food and Agriculture Organization (FAO), told Reuters.

The chief economist for the FAO at the UN explained that this will have a knock-on effect that will ultimately drive up the cost of food.

“High fertilizer prices could have farmers worldwide reducing planned harvests and the amount of land they are planting — with the risk of depressed yields in the 2022/23 crop season — adding to the shortage of imported grains and putting food security at even greater risk,” he said.

As the global food system slips into precarious territory, demand for wheat is forecasted to hit a fresh high in 2023.

“Recent increases in global wheat demand for food use have been fuelled mainly by growing populations and shifts in diets and incomes,” economists from EIU wrote. “Ongoing population growth across parts of Africa and Asia will underpin further expansion in 2022/23, where we forecast that food use will reach a record 546m tonnes.”

Similar to the phosphate story of 2022, potash also faced a number of the same hurdles. The most prevalent was the market’s exposure to Russian disruption.

“In terms of production capacity, potash is certainly the most exposed to disruption from both Russia and Belarus when compared to other major fertilizers,” Humphrey Knight, potash principal analyst at CRU, told INN.

Taking the second and third spot on the top potash producers list respectively, Russia and Belarus produced a combined 17 million MT of potash in 2021.

“Prior to 2022, the two countries accounted for around 40 percent of global supply. Although exports from both countries have faced disruption in 2022, particularly from Belarus, product has continued to flow to many downstream markets,” Knight said.

Muriate of potash (MOP) — the most commonly used form of potash and the more affordable form compared to sulfate of potash — started 2022 at US$221 per MT.

The conflict in Ukraine and sanctions against Belarus drove the price to US$562 in March, the highest level since February 2009.

MOP prices remained at US562 for the remainder of the year.

While phosphate prices moved lower during H2, potash values remained elevated off of continued supply concerns. Fears that supply will be further depleted by Russia’s invasion of Ukraine heightened the impact of sanctions implemented in 2021 that targeted Belarusian potash exports.

“The (Russian) trade sanctions have specified ‘carve-outs’ for the food and fertilizer sectors to avoid adverse effects on global food security,” a January World Bank blog post reads. “These carve-outs have enabled Russia to continue exporting fertilizers. However, potash exports from Belarus have fallen by more than 50 percent due to the restriction on using EU territory for transit purposes.”

Picking up some of that slack is Canada, where the nation’s potash producers have started to ramp up output.

Looking to balance the supply challenge, many market watchers looked to Canada — the leading producer — to pick up the slack.

“Canada’s largest producers Nutrien (TSX:NTR,NYSE:NTR) and Mosaic (NYSE:MOS) maintain plans to reactivate capacity the companies had previously idled, at least partly in response to the supply disruption in Russia and Belarus,” said Knight.

However, as Knight went on to explain, 10 months of persistently high prices have led to demand destruction in the potash market.

“Mosaic recorded only a modest year-on-year increase in potash sales in the first nine months of 2022, and Nutrien saw potash sales decline over the period,” he said. “Despite the supply disruption, demand has been weak, and the Canadian producers have consequently not been able to take advantage of the supply gap.”

Looking ahead, Knight expects 2022’s price surge to have lasting implications for farmers.

“Some spot prices hit record highs in 2022 and this has made potash affordability very unfavorable for consumers,” he said. “Consequently, many have reduced potash consumption significantly and global demand has weakened.”

As farmers reduced their use of fertilizer, many began experimenting with nutrient efficiency and enhancing products. According to CRU, this is something we could see more of in the future.

“As capital markets tighten and fertilizer producers hold flush cash balances, 2023 could be the year to “’roll the dice’ and acquire companies with patented new plant nutrition technologies,” the 2023 outlook reads.

“The potash market certainly remains exposed to further disruption to production into 2023 and could see supply tighten quickly if demand recovers rapidly from its current lull,” he said.

The principal analyst at CRU concluded, “However, a more gradual recovery in demand appears more likely (in 2023) meaning supply should remain adequate.”

Don’t forget to follow us @INN_Resource for real-time updates!

Securities Disclosure: I, Georgia Williams, hold no direct investment interest in any company mentioned in this article.

Boehner and crying: A DC tradition

🟢California Vs Colorado: Who Has The BEST Weed?