Can You Sue Your Neighbor Over Smelly Marijuana Plants?


Despite her best efforts, Josefa Ippolito-Shepherd found herself battling a constant assault on her beloved home of 30 years. Despite her valiant attempts at cleaning, pleading, and even suing, the attack persisted relentlessly. At times, she felt suffocated, unable to find rest or peace in her meticulously-maintained Cleveland Park colonial during her retirement.

The culprit of the constant invasion was none other than the pungent aroma of marijuana. Ippolito-Shepherd suspected it seeped into her home through the tiniest of openings, such as the crevices along her stairs, the maze of pipes beneath her kitchen sink, and even the recessed lights. The source of the problem, she believed, was her downstairs neighbor – a tenant of the adjoining property’s landlord. Despite her pleas to the landlord and the tenant to evict the smoker and stop indoor smoking, her requests fell on deaf ears.

Before cannabis legalization, Ippolito-Shepherd could have sought help from the authorities, and her neighbor could have faced criminal charges. But now, with the laws changed, the police could not assist her. She reached out to D.C. Council chair Phil Mendelson for help, but he informed her that the only solution would be to undo the legalization of marijuana altogether.

Determined to find a resolution, Ippolito-Shepherd took the matter to court, claiming that the smell was a public nuisance. This week, her case went to trial, marking the first in the District court. With marijuana now legal in most states in some form, complaints of the odor and potential exposure to secondhand smoke have been on the rise from neighbors of marijuana farms, dispensaries and smokers. Debates and legal battles surrounding the issue have led to new limitations on where people can smoke and lawsuits over the nuisance.

The opinions on the scent of marijuana are sharply divided, with some non-smokers decrying it as a toxic and potentially harmful odor. At the same time, smokers argue that such complaints have hindered their ability to use the drug, whether for medicinal or personal reasons, within the comfort of their own homes.

The effects of secondhand marijuana smoke remain uncertain due to the federal regulations on research- a relatively new area of inquiry after decades of discussions over tobacco smoke.”The air within my own home should be pure and clean,” Ippolito-Shepherd declared before the trial. “I am not asking for anything extraordinary, just the ability to breathe fresh air within the sanctuary of my own home. While others may be free to indulge in their habits, I should not have to suffer the invasion of unwanted smoke within my own home.”

No Significant Action Yet

Despite the growing number of complaints, local governments have yet to take significant action on this issue. The National League of Cities and the National Association of Counties have not tracked any policy changes related to marijuana odor. However, the distinct aroma of marijuana – once used by law enforcement as probable cause for searches – has become a more common olfactory experience in cities where smoking is prevalent.

In California, cities have begun to seriously consider the possibility of prohibiting smoking within apartments and residential buildings, driven by the anti-smoking movement, according to Dale Gieringer, leader of the California chapter of the pro-decriminalization advocacy group, the National Organization for the Reform of Marijuana Laws. San Francisco had proposed a ban on smoking tobacco and marijuana in apartments due to secondhand smoke. Still, he narrowed the restriction after cannabis activists argued that users could not smoke in public places.

According to Brooke Hoots, an epidemiologist from the Centers for Disease Control and Prevention, secondhand marijuana smoke contains similar cancer-causing toxins as secondhand tobacco smoke. The active component in marijuana that causes high tetrahydrocannabinol (THC) can also be transmitted to young children through secondhand smoke, warns the CDC. Recent research in New York City found that around one-third of parents surveyed reported experiencing marijuana odors in their homes. At the same time, their children were present, as reported in an article by Academic Pediatrics in January 2021.

Hoots, who leads the Cannabis Strategy Unit at the CDC, explained that researchers still lack a complete understanding of the long-term health consequences of marijuana smoke due to the federal government’s classification of marijuana as a Schedule I drug. “Conducting cannabis research is a challenging task,” Hoots said. “Obtaining the products, navigating the regulations and complying with the requirements to qualify for cannabis research is arduous.”

In the first case on secondhand tobacco smoke in 1976, New Jersey’s superior court ruled in favor of an office worker who sued her company for allowing co-workers to smoke cigarettes at their desks. Since then, hundreds of lawsuits have been filed over the health risks of exposure to secondhand smoke, creating a decades-long record of liability when smoke enters people’s homes. However, the issue of marijuana smoking is less established legally.

The aroma of marijuana can be off-putting and unsettling, particularly for those who are not accustomed to it or find it unpleasant. Meredith Kinner, a lawyer who represents members of the cannabis industry in D.C., stated that zoning is an essential consideration for potential cannabis businesses when choosing a location. He claimed such considerations should be examined especially if the business may attract people to congregate outside and smoke.

With legalization taking effect in 2015, D.C. embraced a more relaxed approach toward marijuana, making the familiar scent common. A survey by the Washington Post revealed that over half of residents reported smelling marijuana at least once a month.

The distinct fragrance of marijuana wafting through the city didn’t seem a problem for many D.C. residents, as 45% said it didn’t bother them. However, a minority of respondents expressed discomfort with the smell. Although unwelcome odors are not uncommon in urban areas such as D.C., the city’s 311 system reportedly only received 202 odor-related complaints in 2022. It’s worth noting that marijuana smell complaints were not included in this data.

As more states legalize marijuana, disputes over its aroma will likely become more common. Ippolito-Shepherd, representing herself, stated that she is not advocating for the criminalization of marijuana but rather for stricter regulations on smoking in multi-unit buildings. She is determined to see her case through, insisting that she will not move and take her legal battle to the highest court if necessary to achieve a favorable outcome. 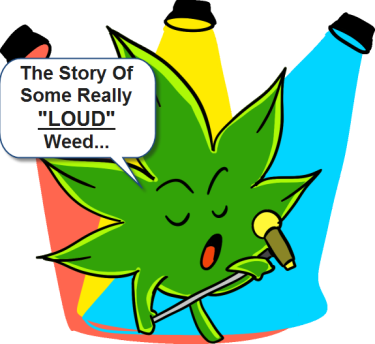 THE STORY OF SOME REALLY LOUD WEED, CLICK HERE!

Meet the newest viewer of our show….