As cannabis legalization continues to gain momentum, a new trend is emerging in the beverage industry. According to national data, beer sales have declined since cannabis legalization. Although experts predict that it may take years, or even a generation, for this trend to fully manifest, early signs point to a shift in consumer preferences.

But so far, many have found relief in the newfound ability to purchase cannabis with clear information about its THC and CBD content and strain. By experimenting with different products, many individuals have discovered the perfect combination to help them relax and unwind at the end of the day. They now choose cannabis over alcohol as a safer alternative. In fact, a significant percentage remark that cannabis could be something they choose over alcohol to relax and mark the end of the day.

As more and more consumers switch to cannabis, the beer industry may have to adapt to a new reality. But while it is still too early to tell the full extent of this shift, it is clear that cannabis legalization impacts the beverage market.

The Beer Industry Taking The Hit

An increase in cannabis legalization across Canada is being felt in the beer industry. According to statistics, beer sales have significantly dropped in provinces with a high concentration of cannabis retail stores, such as Newfoundland and Labrador and the three Prairie provinces. However, this trend is less prominent in provinces like Ontario and Quebec, which have been slower to establish a retail cannabis market. Additionally, in British Columbia, where cannabis was more readily available before legalization, the effect is less pronounced.

The only exceptions to this trend are the three Maritime provinces, where beer consumption remains unchanged despite an increased rate of cannabis use. Additionally, in provinces that are actively expanding their cannabis retail networks, such as Alberta, the decline in beer sales has intensified. In December 2019, for example, sales of domestic beer in bottles and cans in Alberta were down 6.4% from the previous year.

According to Rebecca Haines-Saah, a health sociologist at the University of Calgary, this trend may be because cannabis is now a legal substance, and people are choosing the experience of being intoxicated from it over alcohol. She notes that while the alcohol market is not disappearing, it is being substituted with cannabis consumption.

A Shift In Consumer Behavior

Experts also are noticing a shift in consumer behavior. Dan Malleck, a health policy historian from Brock University, notes that this shift is “fairly significant” as more people are opting for cannabis instead of beer, whisky, or other spirits to unwind at the end of the day.

Haines-Saah, a health sociologist, suggests that this trend may be due to people looking for a healthier substance to help them detach from life’s stressors. She notes that people are turning to cannabis as a relief, aiming to improve their quality of life and promote relaxation. Additionally, as people weigh the harms and benefits of cannabis against alcohol or prescription drugs, they may find that cannabis is a safer and more effective option.

Experts are pointing out that cannabis may be a safer alternative to alcohol. A lower percentage of users become addicted to cannabis than alcohol, and alcohol is linked to a wide range of health situations, including cancer and liver disease.

As people age, they tend to have sleep problems and deal with various stressors such as children, aging parents, the workplace, and financial concerns. In light of these challenges, more people may turn to cannabis to find relief. However, the profound social acceptance of alcohol may impede the shift toward cannabis. Everyone interviewed by Global News acknowledged that while the change towards cannabis is significant, it may take some time to fully take place.

Despite the increasing acceptance of cannabis use, it is still considered less socially acceptable than alcohol consumption, particularly in social settings. Anindya Sen, an economist from the University of Waterloo, notes that it is uncertain how long it will take for this perception to change, as many people still view cannabis as a gateway to more dangerous substances.

However, Haines-Saah, a health sociologist, sees this shift as a potential benefit to public health. She notes that based on current evidence, it would be more beneficial to legalize cannabis and make alcohol and tobacco illegal due to their higher net health harms. Furthermore, she points out that the harms associated with cannabis are primarily a result of prohibition and not the substance itself.

In fact, some experts even jokingly suggest that if everyone consumed cannabis at a hockey game, there would be no more riots or fights in the street after a Stanley Cup final, as cannabis has a calming effect on individuals.

A Complex Relationship Between Alcohol and Cannabis

The relationship between alcohol and cannabis use is complex and not fully understood, particularly as legal cannabis has only recently become widely available. However, early research suggests that as legal cannabis becomes more accessible, certain forms of alcohol consumption may decrease.

A study in the United States revealed that student binge drinking was less prevalent in states where cannabis is legal and has become even less common following legalization. The study’s authors suggest that when cannabis and alcohol are similarly available from legal sources, fewer individuals turn to alcohol, resulting in less problematic alcohol use.

A separate 2017 study in the United States also found that the availability of medical cannabis led to a significant decline in alcohol sales. A 2018 survey of self-reported cannabis users also revealed that nearly half of the respondents would drink less alcohol if cannabis were legalized. However, it should be noted that intentions and actual behavior may differ.

While the relationship between cannabis and alcohol use is complex and not fully understood, early research suggests that as legal cannabis becomes more accessible, certain forms of alcohol consumption may decrease.

Studies conducted in Canada have revealed that student binge drinking is less prevalent in provinces where cannabis is legal, and has become even less common following legalization. Additionally, cannabis-infused beverages may also contribute to a decrease in alcohol consumption.

However, it should be noted that the relationship between cannabis and alcohol is still an evolving area of research and more studies are needed to fully understand the impact of cannabis legalization on alcohol consumption. 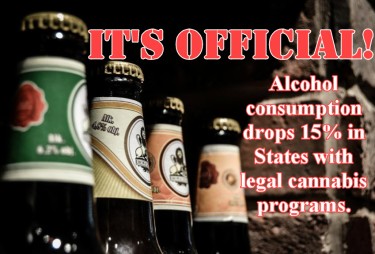 The Ultimate Collection of HolistaPet Reviews

Amazon prohibits CBD sales. We bought some on the site anyway.

High Times In The USA: The States Where Marijuana is Legal in 2023